gRPC is a framework which is being used to build scalable and fast APIs. The framework from which it derives most of its positives is from the protocol it uses - HTTP/2. Apart from HTTP/2, it uses protocol buffer (protobuf) for the communication.

Why Should We Care? Let’s talk Benefits#

aka protobuf . It’s Google’s serialization/deserialization protocol that enables easy definition of services and auto-generation of client libraries. It is an IDL (Interface Definition Language).

Protobuf also has its own mechanisms, in contrast to a typical REST API, which only sends over JSON strings as bytes. These mechanisms enable faster performance and much smaller payloads.

Protobuf’s encoding process is quite intricate. Check out this extensive documentation if you want to learn more about how it functions.

Protocol buffers provide a language-neutral, platform-neutral, extensible mechanism for serializing structured data in a forward-compatible and backward-compatible way. It’s like JSON, except it’s smaller and faster, and it generates native language bindings.

The Protobuf compiler - protoc, generates client and server code that loads the .proto file into the memory at runtime and uses the in-memory schema to serialize/deserialize the binary message. After code generation, each message is exchanged between the client and remote service.

The first step when working with protocol buffers is to define the structure for the data you want to serialize in a .proto file. Protocol buffer data is structured as messages, where each message is a small logical record of information containing a series of name-value pairs called fields. 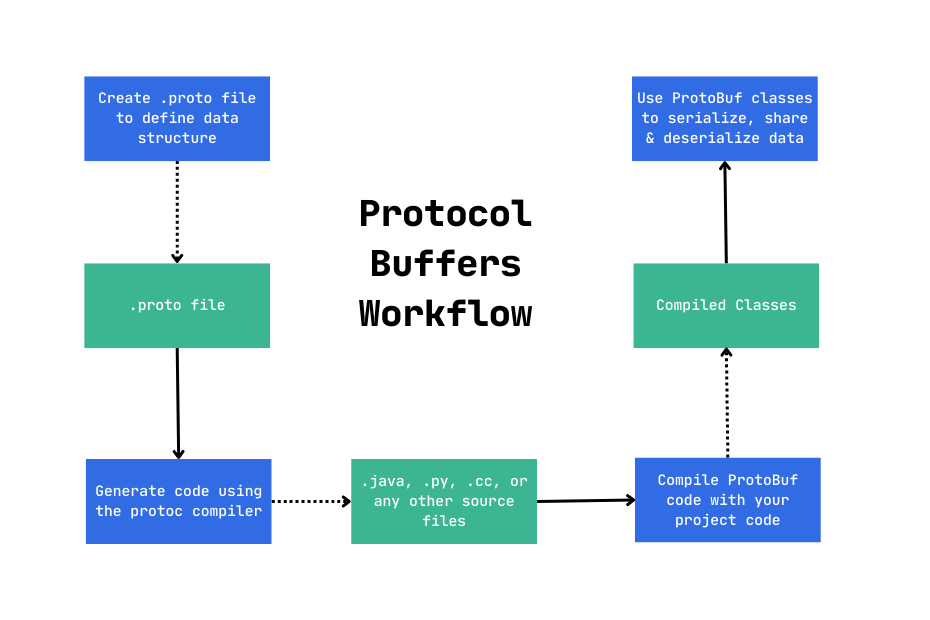 It means that many processes can take place in a single connection, which allows sending/receiving multiple requests/response together over one single TCP connection using HTTP/2 protocol. There are three types of Streaming that can take place -

They are the core concepts in gRPC. It extends the functionality by making, multiple streams of data over multiple concurrent connections, possible.

Starting from a service definition in a .proto file, gRPC provides protocol buffer compiler plugins that generate client- and server-side code. gRPC users typically call these APIs on the client side (client stub) and implement the corresponding API on the server side (server stub).

Stub - Local object that implements the methods mentioned in the proto file into services.

If you all haven’t realized it yet, the RPC in gRPC stands for Remote Procedure Call. And yes, gRPC does replicate this architectural style of client server communication, via function calls.

Below are some references, which help me understand the concepts -

See you folks! Until next time ✌️